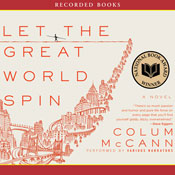 Several months ago, I listened to the audiobook of Colum Mcann’s Let the Great World Spin, a novel which shares the story of several different characters, specifically their responses to the wire walking that Philippe Petit’s unsanctioned high wire walk between the twin towers in 1974.

Immediately, I was pulled in by Colum McCann’s writing and characters. However in books like this, regardless of how good the writing is and how compelling the characters are, if something doesn’t pull the vignettes together, it doesn’t stand up as a novel to me. Colum McCann did this masterfully. He pulled these characters together in ways that were not at all predictable, and the theme of the world turning in the midst of everyone’s separate lives runs through it completely.

I was intrigued by his ability to write in the voice of such a wide variety of people — a working class middle-aged black woman, an upper crust middle-aged white woman, an Irish immigrant priest, a mother-daughter pair of prostitutes (this is the NYC of old — gritty!), an artist couple who are trying to escape the lure of the New York partying life. Yes — all of those characters are written with such a true and natural voice, and it was amazing to read.

The real-life event that this novel centers on is the basis of Philippe Petit’s book Man on Wire, which I have not read. However, I was so captivated by this time period as McCann created it, and the event that he uses to anchor the stories together, that I rented the Man on Wire Documentary that has received much acclaim.

This movie is told in interviews from him and those who helped him over 30 years ago. It was interesting to watch, because if you are like me, you always wonder, “Why do people do things like that?” And after reading the novel, I definitely wondered “How in the world did he do that? And why??“. Except for a few drug references (referring unfavorably to someone who was high much of the time), and an odd quick scene right at the end of the movie that contains some nudity, this would be a great movie to watch with your older kids (and certainly teens could watch the whole thing).

Whether on screen or in the pages, managing editor Jennifer Donovan enjoys a great story.