Many, many thanks to New York Review Children’s Collection for sending this my direction in exchange for my honest opinion. 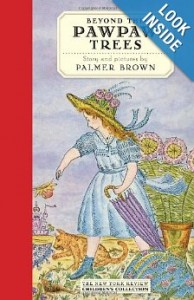 Some of you have no doubt heard of this title. Beyond the Pawpaw Trees has been around for awhile, but it has recently been re-released by The New York Review Children’s Collection for which I am very grateful. The title sounded vaguely familiar to me but I had never read the book and was happy for the chance to do so.

In this whimsical story we meet Anna Lavinia whose name is very fun to read. She lives with her mother who is a fairly black and white and dour sort of woman. Anna Lavinia’s father is “off chasing rainbows” and is never at home. Then on one glorious lavender blue day, Anna Lavinia’s mother decides to send her  off to visit her father’s sister. Now, Anna Lavinia has never been beyond the walls of her yard so this decision is something of a surprise! Her mother has consistently said that there is nothing interesting to see in the world. Clearly the only thing that could have brought about her mother’s change of heart was the lavender blue day in which anything can happen.

Off treks Anna Lavinia to her aunt and along the way she has a million little out-of-the-ordinary adventures. Of course, Anna Lavinia doesn’t necessarily understand that the things she is encountering are strange because she’s never traveled. What she does find  at the conclusion of her adventures both delights and thrills her.

Beyond the Pawpaw Trees is a very fun story. I loved it so much that I’m giving it 5 stars because I think it deserves it! I give this one a highly recommend to burgeoning young readers and adults, who are also in need of a little whimsy every now and again!

Carrie loves discovering old classics for herself. She blogs about them regularly over at Reading to Know.

« The Honey Thief
The Longings of Wayward Girls »