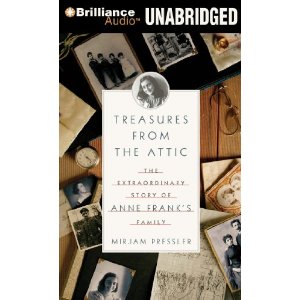 The product description says it best: An old lady, an antiques dealer, dies in Basel, Switzerland. Her devoted daughter-in-law finally steels herself to do what all families must in the aftermath of a death – she heads upstairs to the attic to sort through the old lady’s effects. But this wasn’t just any old lady, and this wasn’t just any old family house. Helene (Leni) Elias was born Helene Frank, only daughter of Alice Frank and sister of Otto Frank, who in turn was Anne Frank’s father. 1929 destroyed the Franks’ banking business in Frankfurt; the rise of the Nazi party began to destroy their lives. Alice, the matriarch, left Germany for Switzerland in the early 30’s; her four children scattered to other European capitals, but she remained the hub of their lives; they wrote (voluminously), they sent photos, they visited for summer holidays and huge family reunions, and then of course wrote about them when they got home. Alice was their Central Post Office and their Telephone Exchange, and she kept every bit of it she could. In wardrobes, in steamer trunks, in drawers, in boxes, in packets tied up with ribbon and string—it all sat upstairs in her house. This was the house where her son Otto, Anne’s father, had come to live for seven years as the sole survivor of his little family after the liberation of Auschwitz. Such memorabilia as he rescued also went upstairs. When Alice died, her daughter Helene inherited the house. When Helene died, her son Buddy, Anne’s childhood playmate, and his wife Gerti, inherited in turn. And finally Gerti went upstairs to sort out the attic……..

Mirjam Pressler is a beloved German author, and the award-winning translator of Anne Frank’s Diary. She organized these notes and letters and adds in some information about what others of that day would have been doing or wearing or were thinking, so that Treasures from the Attic: The Extraordinary Story of Anne Frank’s Family reads as a continuous narrative, not just a series of letters. Gerti and Buddy were additional sources that she used for clarification.

At first it was hard for me to get into, especially the audiobook version, because I was trying to make connections and draw the lines on the family tree, but then I relaxed and let myself enjoy the stories of this warm, loving and silly family, going all the way back into the late 1800’s. We learn that other relatives placed importance on keeping a record of their thoughts via a journal. It’s grave to consider the likelihood that Anne would never have journaled her time in hiding from the Nazis were it not such a valued habit in the family.

After the somewhat slow start (just because it wasn’t connected to the time period that I associate with Anne Frank), bits of information about the prejudice against Jews throughout Europe begins to surface. And here’s the real irony — though Jewish by birth, the Frank family was quite secular in practice, even celebrating Christmas as a holiday, and not even attending temple on the high holy days.

Less than halfway through brings us to the low point in Otto Frank’s life, as we find out that Edith, Anne, and Margot have all died, as we wrote letters and telegrams back home after he and the other concentration camp inmates were freed by Russia (a fact that was new to me). At this point, the story becomes quite absorbing — perhaps because it’s familiar, and perhaps because of the way we’ve gotten to know the rest of the extended family. We experience this shocking news along with them, as they feel guilty for their relative ease and safety in Switzerland during this time.

The last half of the book continues to focus on the other family members, grandmas Alice and Ida and their children and grandchildren, but primarily looks at Otto’s work getting the diary published in many countries, and protecting its reputation by fighting those who claim it’s fiction. The book did not become a bestseller until the Tony-award winning play was staged and traveled throughout the world. Then the movie followed.

Otto used most of the proceeds from the success of the book, play and movie to set up the Anne Frank foundation to fight racism and encourage religious tolerance, and built a museum at the site of the secret annex, which is now one of the top ten most visited museums in Europe.

Hearing all that was preserved in this family’s letters to one another, and how much it told — not just about the horrid events of the day, but of their close-knit ties, jokey manner, and the way they expressed love — makes me think about what sort of legacy important and influential teens of our day are leaving behind. Surely the text messages, emails, tweets, and wall posts of this generation will not be preserved.

In addition to fans of Anne Frank or those who want to know more about the Nazi occupation, those who enjoy late 19th and 20th century European social history will no doubt enjoy this look at daily life, along with the struggles to overcome the extreme prejudice and persecution of the Jews at that time. Since the last half of the book also deals with the family’s loss of Anne and Margot and their mother Edith, I would think that someone who’s suffered the loss of a child might feel comforted or at least understood in these pages.

AUDIO NOTES: Treasures from the Attic: The Extraordinary Story of Anne Frank’s Family is a quiet book about a serious topic, and the reading follows this course. Sherry Adams Foster fooled me! I assumed that it was a German reader, but she wasn’t. However, hearing the accent definitely helped me become more fully immersed than if I had just been reading it.

I also find that in history books such as this, listening to an audio version helps me stick with it. I enjoyed this audiobook very much.

Jennifer Donovan has a stash of love letters from her husband in her closet and during those college years, she also wrote long letters to her best friend from high school. Her day to day memories are now preserved in cyberspace at her blog Snapshot.