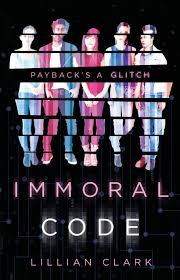 5 close friends, seniors in high school, all uniquely gifted and dealing with college admissions, hopes and dreams that may or may not be supported by parents.

There’s Nari, aka Narioka Diane, aka hacker digital alter ego “d0l0s.” She’s bright, opinionated, and in many ways the natural leader of the group of friends who’ve been close all through school. She is dating Keagan, a sweet guy who sort of goes with the flow. He’s on the swim team with Santiago, who has already been accepted to Stanford’s swim team and has a real chance at the Olympics, although his parents are encouraging him to play it safe. There’s Reese, a creative free-spirited girl whose hair is always a different color and who wants to make art and see the world.

Finally, there’s Bellamy (aka Bells). Raised by a single mother who works menial jobs nonstop to support them, Bellamy is brilliant and has gotten into MIT. The only complication is that her birth father Robert Foster, a man she doesn’t know at all, is a tech giant billionaire in San Francisco. His income disqualifies her from receiving financial aid or scholarships, but her mother can’t afford to help and refuses to ask. Her friends are outraged. And Nari hatches a plan–to hack into Foster’s bank account, remove only enough to pay for MIT. Blocked by firewalls, she persuades the other 4 to a daring plan where they break in to Foster’s office and install malware physically on his computer.

Immoral Code is a fun, fast-paced read. I really enjoyed it, in spite of a few nit-picks (such as it is supposed to take place in a small coastal Oregon town, but there is no town on the coast of Oregon like the one she’s describing. Also, one high school in a small town has produced 5 such talented seniors? I dunno). The characters are well developed, and the plot has them thinking through the implications of their choices, and questioning their motives and actions. Another of my nit-picks is honestly how much they grew as people. It seemed a little unrealistic. Still, I’m all for a happy ending, and this hit all the right notes.