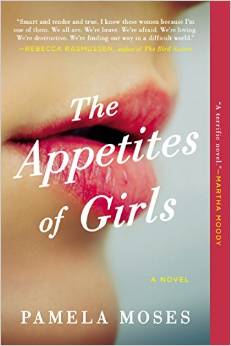 This was a great novel which followed 4 college roommates from early adolescence to years after college. When they meet at Brown University, they decide that the university must match up people based on their differences, not their similarities:

The Appetites of Girls by Pamela Moses was slightly hard to get into at first due to the structure. The women are barely introduced as women in their late 20’s or early 30’s, in a short prologue, and then their individual stories are told in alternating chapters. This was effective. It’s hard to keep them straight having no context to anchor them, but all the stories are interesting and are definitely necessary to understand the girls as young women. Readers will probably identify with one of the characters more than the others, depending on whether you are a people-pleaser, a beautiful girl, an over-achiever, a rebel, a traditionalist, or a middle-of-the-road gal.

I read an egalley of this book and was surprised to find it was over 400 pages when I was formatting the post. I read it rather quickly because these characters and their futures interested me. They each made bad choices, but it’s just a testament to their youth, accurately presented. That said, their mothers made horrible choices as well and were not able to use the “brain isn’t fully formed and functioning until it’s 25” excuse. I honestly wanted to scream at the mothers at times, but I also think the situations were painted in such a way that the daughters, whether they were 12 or 19, bore some responsibility as well. I wanted to scream at them too, “Don’t worry about what she says! Do what you are called to do! Enjoy yourself!”

The title theme is woven throughout, with women using food or avoiding food in ways that directly speak to their current circumstances, something to which many women can generally relate.

« Wishful Thinking
Where Women Are Kings »