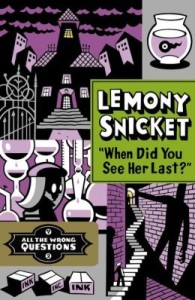 Lemony Snicket is asking all the wrong questions in the second book of the series by that name, When Did You See Her Last? by Lemony Snicket. Lemony, a 12 year old boy, is still in Stain’d-by-the-Sea. a town that is failing and emptying out. His chaperone S. Theodora Markham announces to Lemony that they have a new case, to find the missing Miss Cleo Knight.

From the beginning, When Did You See Her Last? is silly and confusing and madcap. S. Theodora and Lemony head to the home of the Knights where they are met by Zada and Zora, the twin lookalike servants who expressed concern over Miss Knight’s disappearance. Her parents are in a daze, as their personal apocathary, Dr. Flammarion, who has been drugging them with laudanum for some surely nefarious purpose.

After minimal investigating, S. Theodora announces that the case is closed. Miss Knight has simply run away to join the circus of her own free will, so there is nothing to worry about. Lemony refuses to believe this and instead initiates his own investigation, much to the consternation of the local entertainingly bickering police, the Mitchums.

Needless to say, mayhem ensues as Lemony starts to unravel the mystery. Every person he encounters has secrets, not all of which they agree to share. Some of the characters are reappearances from the previous book, which might help untangle some of the webs, but many are there simply to be mysteries and confusing until the conclusion of the series.

The book was a quick read, once I was able to get into the style of the writing (confession: I’d not previously read any of the Lemony Snicket books) and accepted that it was supposed to be slightly confusing as you read it. This is one of the books that I would recommend reading in order so that you are able to follow as much as possible, as the books definitely build upon each other.

The wee ones are fascinated, as well, and the style of the book is definitely one to draw kids into reading. The illustrations throughout the book only add to the fun, making the fun characters even more unique and appealing. The same goes for some of the words and phrases used throughout the book. While they might not be familiar to many children, they are used and shared in such a way that they are defined in a way that helps kids while keeping them giggling.

Though the mystery of Miss Cleo Knight is solved by the end of When Did You See Her Last? after Lemony finally learns to ask the right questions, so many more questions are left unanswered, ready to be addressed in the next books of the All the Wrong Questions series. I’ll be waiting for them.

Written by Michelle who loves that the town where she lives is thriving. She shares her stories, though hopefully in a far less confusing manner, via her blog Honest & Truly! and on Twitter where she is also @HonestAndTruly.

« The Preservationist
Elly In Boom »