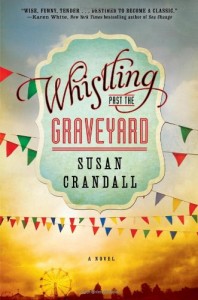 As a young white girl in Mississippi in 1963, Starla has grown up with the idea that her skin color afforded her a superiority over others, most especially black people. At nine years old, Starla hasn’t yet experienced much outside her small town under the watchful and strict, eye of her grandmother, so she hasn’t questioned the order of the world around her. When she gets in trouble once again, rather than face the harsh punishments she’s sure await her, Starla decides to simply leave. Of course, being so young and naive, she doesn’t quite understand the enormity of her plan to make her way to Nashville to find her mother. Susan Crandall’s Whistling Past the Graveyard paints a picture of the Jim Crow South through the eyes of a young girl, an earnest and honest narrator if there ever was one.

Starla has a penchant for doing the wrong thing, which her grandmother is quick to point out and discipline. Their personalities don’t match at all, yet Starla’s stuck with her while her father works out on an oil rig and her mother has fled to allegedly pursue a music career. When Starla runs off, she doesn’t make it very far on foot, and soon she is found on the side of the road by Eula, a black woman driving to her home on the outskirts of town. Starla hesitantly accepts her offer of water, as thirsty and hot as she is, especially after Eula assures her that it is a clean bottle and that she hasn’t drank from it. Eula offers to put her up for the night, saying that her husband will be able to help her get back on her way to Nashville in the morning. When Starla gets in the truck, she sees that Eula has a baby with her, and it’s a white baby at that. Starla’s grandmother always told her that she found trouble wherever she went, and sadly, this time Starla finds a world of trouble when they arrive at Eula’s house, which ends up being just the beginning of their story together.

On that drive with Eula to her home, Starla sees racism-fueled hatred for the first time, something that surprises her even though she has always observed a separation of the races. She just never saw inexplicable and mean-spirited attacks on black people at the hands of whites, and over the course of their time together, Starla begins to understand the injustice of it all. As Starla bonds with Eula, her eyes are opened to both the harsh realities of the time in which she lives, and the experience of being truly loved and cared for by a mother-figure.

As they continue their travels in search of Starla’s mother, the two go through several incredibly harsh experiences that are haunting and terrifying to even read about. For a while, it felt like they were never going to catch a break, but even when things looked the bleakest, thankfully they met people with true and kind hearts to help to balance out the awfulness. Starla’s natural empathy and sense of justice now have a new area in which to be exercised, and Eula finds a strength within her she had never known existed. Eula isn’t in the background in this novel, but is a fully-developed character whose heart and soul have been beat down for so long. Though she’s been a victim for practically her entire life, Eula isn’t ready to give up and her eyes are opened, as well, to the changing of the times that helps to stoke a bit of hope she had never dared to feel before.

Whistling Past the Graveyard is an impressive take on the deep South in the 1960s, and by using young Starla as the narrator, a matter of fact tone is set from the very beginning. Readers get a first-hand account of a budding understanding of racism and hatred, and this novel gives a face to the tone of the deep South at the peak of the Civil Rights Movement.

« Eva Piper on sharing her Walk Through the Dark
Hungry »