Do you have a middle school student who likes reading about horses, outlaws, rough riding, Indians and old trails? Then this series, published by Peachtree Publishers, is for them!

, set in the year 1811, begins the story of fourteen year old Zeb as he begins trying to escape from a band of ne’er do wells in search of his grandfather who has been reported as being killed. Zeb doesn’t believe the reports and is off on a hunt to find his beloved grandfather, who took the place of his own father after he had died from fever a few years back. Along the way, Zeb meets up with a young girl (age 11) named Hannah. Hannah is half Choctaw and half wide and she found herself an unfortunate victim of a kidnapping. Having spent six months with a band of outlaws, being used as a decoy to attract the attention of lone travelers on the Natchez Trace (yes, that’s Trace not Trail), she has made her escape and is trying to find her parents. In The Devil’s Highway both Zeb and Hannah are in search of family – family that they love and miss. On the way they make enemies with a scum of a U.S. Army man. Zeb makes friends with the Choctaw Indians and there is a running love of horses spread throughout the book. 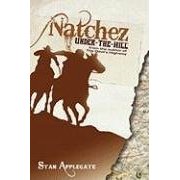 picks up where Book one left off. In this book, Hannah has just been reunited with her parents and Zeb is hot on the trail of his missing grandfather. This book is filled with horse races, earthquakes and an almost constant avoidance of old enemires (from the first book). This is an “old west” (set in the East) story that is fast-paced, clean and just plain fun. Respect for all men and all races is clearly evident in this book. It’s an anti-killing anything book (only killing animals that you can, need and WILL eat for food!) and quite politically correct. But it was subtle and well done enough to not be emphatic and preachy. Really, this book was clean and plain fun. The relationship between Zeb and Hannah is more of a sibling relationship – particularly in book one. They work together to find their families and escape those who would wish them harm. Good and evil are clearly differenciated between themselves and did I mention it’s just fun? Well, if I didn’t – I should have.

At the end of each book the author has included some historical facts which surround the setting of his stories. The stories are marked as being Middle Grade Historical Fiction and the author does a good job of making the facts very interesting and engaging. These books are rather well done and I feel pretty good about them on the whole. For me it was a fun diversion and I’m grateful to Stan Applegate for taking the time to write these stories up to be enjoyed!