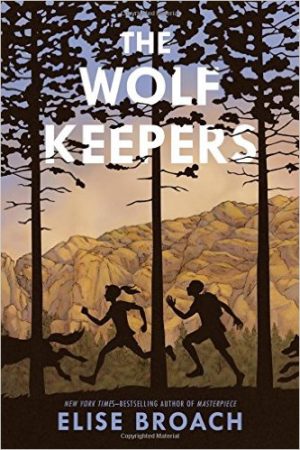 Lizzie lives at the zoo with her zookeeper dad, Mike. She’s on summer break, dutifully recording observations in her notebook about the outdoors, John Muir style, to fulfill a school requirement. She spends time daily watching the wolves, connecting in particular with the large, winsome pack leader Lobo.

Sounds pretty perfect, right? It’s not bad, but it’s far from perfect. Lizzie’s mother died when she was a baby and her best friend is away all summer, so she’s a bit lonely, until she meets a boy her age in the zoo. She encounters Tyler when she sees him steal a tray of food off a table in the snack bar. She comes to find out that he is homeless and hungry and has been living in the zoo.

The long, unstructured summer days help their friendship develop quickly. After only a few days, they are fast friends, united in their love and concern for the animals. When the wolves start getting sick, they come together to try to figure out why.

Tyler gets worried that he will be discovered and sent back to his foster family. This concern and an escalation of danger to the wolves, lead Tyler and Lizzie on a pilgrimage to John Muir’s old haunt, Yosemite, where they try to find his lost cabin.

I remember my daughter reading novels by Elise Broach years ago. My 12-year-old son and I read The Wolf Keepers together. There were times of suspense and sweetness and lots of quality moments for animal-lovers. It was never too intense or too sappy, but perfectly balanced with action and emotional connection. 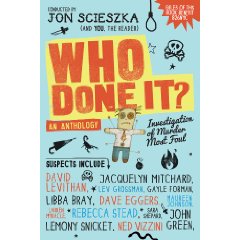 Can you imagine the most cantankerous book editor alive? Part Voldemort, part Cruella de Vil (if she were a dude), and worse in appearance and odor than a gluttonous farm pig? A man who makes no secret of his love of cheese or his disdain of unworthy authors? That man is Herman Mildew.

The anthology opens with an invitation to a party, care of this insufferable monster, where more than 80 of the most talented, bestselling and recognizable names in YA and children’s fiction learn that they are suspects in his murder. All must provide alibis in brief first-person entries. The problem is that all of them are liars, all of them are fabulists, and all have something to hide…

I would highly recommend Who Done It? to anyone who reads a lot of YA fiction, and especially those who are major fans of the authors. It is slightly long, with over 70 different authors’ takes on why they did not kill editor Herman Mildew (even though most of them are suspect in some way, and almost all admit to wanting him dead). But I can’t think of one entry that I would have deleted.

As I said, if you are a YA insider, then you’ll love the in jokes (In her entry Emily Jenkins, a beloved children’s author, pokes fun at someone who might use a pen name, when in fact she writes YA under the name of e. lockhardt), not to mention the personality-filled, 1st person, humorous accounts from any author you love. I also found myself looking up several authors whose work I was unfamiliar with, yet whose entry charmed me.

Check out some of the powerhouses featured (children’s and YA authors, but all writing in an adult/young-adult way):

All in all Who Done It? is a very fun read, either to sit down and read straight through, or to pick up here and there when you want a short reading fix.

The only disappointment is that you don’t really get an answer at the end, though the twist is clever in itself, and it hardly had read as a serious fact-gathering mission to that point, so I wasn’t surprised.

CONTENT NOTE: I was familiar with Jon Sciezcka’s GUYS READ anthologies (fantastic!), so I automatically assumed that this was a collection for that same middle-grade 9 – 12 audience. It’s not. It’s definitely young adult, with a bit of mild profanity and some sexual references (concerning affairs and whatnot, though there is no explicit sexual content). 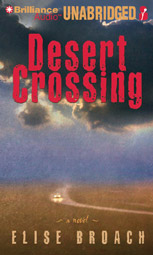 Jamie couldn’t stop in time. There was no way to miss the coyote running across the road. It was a coyote wasn’t it? It was Lucy’s idea to stop and make sure. What they found on the side of the road put an unexpected kink in their road trip.

Traveling to Phoenix to visit her Father for spring break, 14 year old Lucy, her older brother Jamie, and his best friend Kit pull over on the side of the road to inspect the animal that they hit. As they approach they realize it wasn’t a coyote at all but a girl not much older than themselves. A dead girl.

So starts Elise Broach’s book Desert Crossing. What ensues after the discovery of the girl is a web of mystery, suspense, and romance. Lucy will not stop until she reveals who the girl was and what she was doing in the middle of the desert on such a stormy night. Jamie is too wrapped up in a forbidden romance to worry about what his sister is doing and Kit becomes Lucy’s sidekick and kissing partner.

The story is a murder mystery and therefore kept my attention. However, the relationships that formed between the characters were beyond belief and hard to accept. Lucy goes from hating Kit to kissing him without any development. Still, for the reader who enjoys good detective work this story is entertaining.

The voice of Lucy, read by Amy Rubinate, rang true as a 14 year old. However, as the plot thickened and romantic situations arose it was hard to picture the innocent sounding voice getting involved romantically as she sounded quite young. The situation seemed too mature for the character.

You can listen to an audio sample at the Brilliance Audio site.

Although there are sexually mature relationships in the story there are no explicit descriptions, which makes this story appropriate for readers age 13 and up. The mystery and the underlying relationships will definitely draw and hold the attention of the average teenage girl but the voice of Lucy and the lack of action will deter boys.

Guest Reviewer Betsy is a Youth Services Librarian at her hometown library. She is due to start a new chapter in her life this September with her fiancé Adam, a comic book fanatic, at their book themed wedding. She does most of her reading (listening) while walking her two dogs in the morning, her favorite time of the day. Betsy enjoys apocalyptic fiction, historical fiction, and everything in between.

I’ve been a fan of audiobooks ever since I got my ipod and began downloading books. I have been thrilled with the audiobooks that Macmillan Young Listeners sent me so that I could share this new way of enjoying books with the whole family.

Our favorite by far, that I highly recommend for a gift, is The Cricket in Times Square, that I reviewed HERE last summer. It’s one of those books from my childhood that Amanda also enjoyed, and the audio version is really delightful, artfully recorded by Tony Shalhoub. 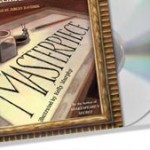 Masterpiece is a pretty good story by Elise Broach (coincidentally a bit similar — featuring a cockroach instead of a cricket) involving an art heist and a boy trying to figure it out. Amanda enjoyed it, but I did not find this audio recording to be especially compelling. I’m a bit of an audiobook snob in this way. I can read, so I don’t need a nondescript voice reading aloud. Most sites (including MacMilian) offer clips of the audio, and I recommend that you listen before buying. 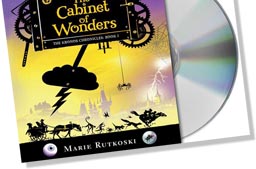 The Cabinet of Wonders is the first book in the Kronos chronicles. THIS book captured Amanda’s interest — both the story and the audio recording. Of course, it’s the kind of book that she likes: imaginative fantasy. She can’t wait to hear — or read — the second in the series.

For younger children, you can’t go wrong with James Herriot’s Treasury for Children: Warm and Joyful Animal Tales. The audiobook is recorded by Jim Dale (who also recorded the Harry Potter books), and this recording DOES lend something. It puts you, the listener, right there in those country barns 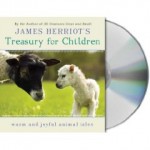 and pastures with the good vet. I think that this would make a fantastic gift (packaged with the book even) for a young listener, age five to eight, or a great family gift that could appeal to a wide range of ages.

Another collection that will appeal to a wide age range are the short stories of William Steig, including the The One and Only Shrek! (yes, that Shrek). These recordings by Stanley Tucci and Meryl Streep (yes, that Meryl Streep) are fabulous and fun.

For even younger listeners — babies up to three — the recording of It’s Time to Sleep my Love and On the Night you Were Born is sweet and soothing.

As I said in our Christmas Gift Recommendations post, I think that giving audiobooks is a great way to share books, but in a slightly more exciting way, both for the booklover and the reluctant reader.

Managing Editor Jennifer Donovan is a contributing editor at 5 Minutes for Mom. She blogs at Snapshot about daily life with her tween daughter and preschool son.