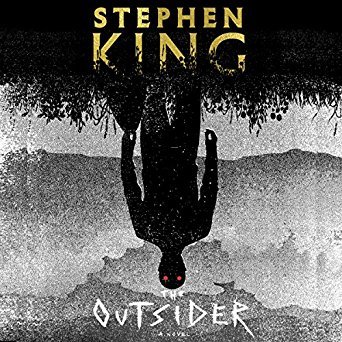 I’m a long-time fan of Stephen King and also a lover of audiobooks. So when King has a new book out, I wait impatiently for the email from Simon & Schuster offering it on audio, immediately sending in my request. I often don’t even bother to find out what the book is about, which was the case with The Outsider. So I was pleasantly surprised to learn that not only is The Outsider continuing King’s recent string of detective novels, it could be considered a fourth book in the Bill Hodges series (linked to my reviews of all 3 books in that trilogy).

Flint City, Oklahoma’s beloved coach Terry Maitland is in the middle of his Little League team’s playoff game when the police descend on the field, arresting him for the death of Frank Petersen, a local boy who was brutally murdered. Detective Ralph Anderson is so incensed at the crime that the evidence says Terry committed that he ignores protocol with the public arrest. But soon the arrest comes back to bite Ralph in the butt, as Terry was over an hour away at the time of the crime, and he can prove it.

Ralph doesn’t understand how Terry can be in two places at once, as fingerprints and eye witnesses place Terry at the scene of the crime, but Terry’s alibi is air tight. When events occur that end up with Ralph on administrative leave, he just can’t let go of the idea that Terry is in fact innocent. Along with a group of other folks who are not convinced Terry is guilty — his lawyer, a private investigator, and a state cop among them — Ralph follows the impossible but increasingly likely trail to the killer. When Holly Gibney, former partner of Bill Hodges gets involved, she’s convinced the killer is of a supernatural nature, an idea Ralph has a really hard time getting behind.

As with most King books, this one is longer than the average novel, closing in on 500 pages and about 20 hours on audio. There aren’t many slow moments in the story though, as it moves from the immediate aftermath of Frank’s death, to the investigation that seems clear cut, to Holly’s involvement and another case that’s eerily similar, to the final showdown with the killer. As mentioned earlier, as Holly tries to convince Ralph that her idea is not absurd, there are major spoilers for the events of Mr. Mercedes, Finders Keepers, and End of Watch. While I don’t think reading that series is required to enjoy The Outsider, it would help to understand Holly’s back story and how her character has evolved. Anyone who plans to read that series should do so before reading The Outsider.

Notes on the audiobook: Will Patton narrates The Outsider, as he did the Bill Hodges series. He does an amazing job of making each character unique and really brings Holly to life. 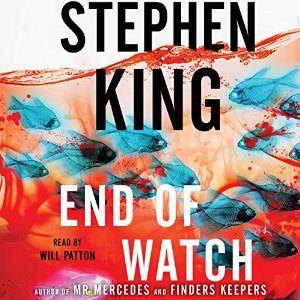 End of Watch is the third book in Stephen King’s trilogy about retired detective Bill Hodges, his partner Holly Gibney, and college student Jerome Robbins. In Mr. Mercedes, Hodges and his friends stop Brady Hartsfield from committing another mass murder when Holly brains him with a sock filled with ball bearings, leaving Brady in a coma and ostensibly a vegetable. Finders Keepers doesn’t feature much of Brady, as Hodges, Holly, and Jerome solve a mystery involving rare books and a teenage boy. Brady is back front-and-center in End of Watch, finding new ways to get back at Hodges for preventing him from carrying out his plans and leaving him in his current state.

Hodges has never believed Brady is a incapacitated as he claims to be, but agrees to stop visiting him in the hospital and move on with his life. But when the surviving victims of the Mercedes killer begin committing suicide, Hodges is pretty sure Brady is involved. Hodges also gets some news about his health that makes him realize his own future is in question, and relies even more heavily on Holly and Jerome to help him stop Brady.

The first two books in the series, Mr. Mercedes and Finders Keepers (linked to my reviews), are the latest in King’s new territory of crime stories, and End of Watch brings back his more well-known genre of the supernatural, with Brady’s ability to control both people and objects from his hospital bed without moving a muscle. This is absolutely a trilogy and reading the first two books is a requirement for understanding and enjoying the concluding novel.

End of Watch drags a bit at times, and I felt Mr. Mercedes was by far the best of the three books, but this is an enjoyable and satisfying conclusion to the Bill Hodges Trilogy.

Notes on the audiobook: Will Patton narrates this book, as he did the other two in the series. I enjoy especially his depiction of Holly’s voice and mannerisms and he does a great job of keeping the suspense level high. In Mr. Mercedes (linked to my review), Stephen King continues moving away from horror and into the crime/mystery genre with a story about a rag-tag group of unlikely friends who track down the man who ran over a crowd of job-seekers with a stolen Mercedes. Finders Keepers is the second in a trilogy about Bill Hodges, retired detective turned bounty hunter, his assistant, Holly Gibney, who has come a long way in her interpersonal skills, and neighbor Jerome Robinson, home for the summer from college.

In the year 1978, reclusive author John Rothstein is woken from sleep by 3 intruders. The men, lead by Morris Bellamy, are after the money Rothstein keeps in his safe, but also find another treasure — notebooks that continue the series about Jimmy Gold that made Rothstein famous. Morris buries the notebooks, planning to dig them up when things have calmed down, but lands in jail for an unrelated crime.

Decades later, Pete Sauber finds the buried notebooks and the money. His family has been struggling since his father was hurt in the Mercedes massacre, and the money is just what they need. But when Morris finally gets out of prison, he’s determined to track down his treasure, and it doesn’t take long for the trail to lead to Pete.

Finders Keepers is a little slower than Mr. Mercedes, and the big confrontation felt a little lacking. It also was a bit of a stretch the way Hodges and crew get involved with Pete’s situation. But I liked how the main characters have developed since the end of the first book, and Hodges’ visits to Brady Hartsfield (the driver of the Mercedes) leave me curious as to what will happen in the third book.

Sometimes books in a series can be read stand-alone, without having read prior books. I would not recommend reading Finders Keepers without first reading Mr. Mercedes. The story of how Bill, Holly, and Jerome come together is important, as are the details of the capture of Brady Hartsfield.

Notes on the audiobook:  Will Patton continues narrating the series and I continue to enjoy his style. To hear an excerpt from the book, visit the Finders Keepers page at Simon & Schuster. 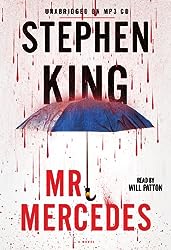 Almost every time I review a Stephen King book, I feel like I need disclaimers — most of his recent books are not the horror, blood, and gore that most people associate with his work. The same can be said for Mr. Mercedes. This is not the King many people avoid, in fact it’s a new genre for him — a hard-boiled detective novel. And his first attempt is a good one.

Detective Bill Hodges, retired, left only a handful of unsolved cases when he left the police force after 40 years. One of those cases comes back to haunt him when he receives a letter from a man claiming to be the one who stole Olivia Trelawney’s Mercedes and mowed down a crowd of job-seekers. This contact is the kick in the pants that Hodges needs to get out of his recliner, turn off the TV, and rejoin the human race. He opts not to inform his former partner of the letter, but instead joins forces with Janey, Olivia’s sister, who wants to find the guy responsible for her sister’s suicide, and Jerome, his 17 year-old next-door neighbor.

Brady Hartsfield has gotten a little too cocky since committing the mass murder. Bored with his jobs as big-box-store IT guy, a la Geek Squad, and ice cream man, he decides to have a little fun with Hodges, hoping to goad him into killing himself, just like he did to Mrs. Trelawney. Only Brady doesn’t know what he’s gotten himself into, and the more he pushes Hodges, the worse things get. Their cat-and-mouse game quickly turns dangerous, as Hodges gets closer and closer to Brady, who only digs himself deeper, with both making mistakes and losing loved ones along the way.

“Mr. Mercedes” is a fast-paced thrill ride, the kind of audio book that’s good for my health as it makes me walk just a little bit longer to hear what happens next. Hodges and his band of sidekicks are an unusual bunch, working well together to get the Mercedes killer. King creates characters who are believable, flawed, and not always quick on the draw, but all share a goal to keep their loved ones safe while closing the case of Hodges’ lifetime.

Longtime, loyal fans of King’s work may be disappointed by the lack of supernatural or horror, as well as a story that takes place outside King’s fictional universe, but those who enjoy well-written fiction will be satisfied by this foray into crime novels.

Notes on the audiobook:  “Mr. Mercedes” is narrated by Will Patton, who also narrated “Doctor Sleep,” the sequel to “The Shining.” I didn’t like “Doctor Sleep” much, and was afraid that would curb my enjoyment of “Mr. Mercedes,” but happily that was not the case. Patton does an eerily good job at voicing a psychopath, while also nailing the nuances of the detective.