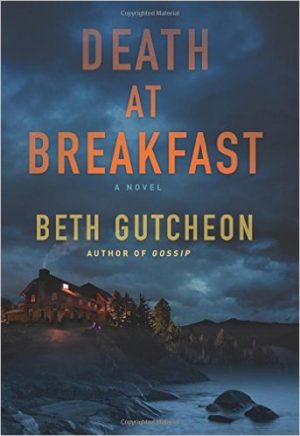 Usually, when you can’t easily classify the genre of a book, that’s not a good thing. Death at Breakfast is hard to categorize, but it’s a fascinating and entertaining read. Part literary fiction with character studies, part murder mystery, part humor, the novel is the 10th by Beth Gutcheon, this is not the book I had expected when I first picked it up.

When Hope Babbin decides to take her friend Maggie Detweiler – recently retired headmistress of a private school – on a week long cooking course vacation at a small town Maine inn, she expected it to be a trial run for future travel to ensure they could get along together for long stretches in close quarters. Instead, she finds the inn invaded shortly after their stay begins by the Do You Know Who We Are group that includes Alexander and Lisa Antippas her sister Glory. The group shatters the peacefulness of the inn, from Alex sending back his dessert because the crumb texture isn’t to his standards to Lisa’s dog Collette yapping constantly and disturbing all the other pets (and people) staying near the room.

Adding more intrigue to the book is the interplay of the employees of the Oquossoc Mountain Inn who have their own lives and challenges. Cherry Weaver is a poor employee who was hired because her mother works in the kitchen and recommended her as a last gasp effort to get her daughter a respectable job. Earl Niner pays for his keep by doing chores at the inn’s barn and gardening, but he’s a figure of pity, given the job after a debilitating accident when his family refused to take him in. Gabe Gurrell owns the inn and sometimes wonders if he made the right choice, as he proposes every Thursday to his executive chef Sarah.

That doesn’t even take into account the coincidence that the deputy sheriff of West Bergen is Hope’s son, a man proud of his job but doing his best to keep his family at arm’s reach, not going so far as to even tell his mother that he has a girlfriend, let alone a live-in girlfriend, who (of course) is the sister of Cherry Weaver. Despite the plethora of characters in the novel who are introduced rapid fire one after the other, they are all completely distinct and fascinating in their own right.

Though Hope and Maggie are ostensibly the main characters of the book – after all, they are the ones who decide to do some sleuthing to find the murderer unexpectedly in the midst of their holiday – the book is told from the points of view of multiple main characters, which takes them from being caricatures of themselves to actually having justifiable reasons for what they’ve done. This allows you to see inside their heads and understand them more fully, making the book that much richer and deeper while also ensuring that you are better able to understand the characters themselves.

As nontraditional a murder mystery as this novel was, I thoroughly enjoyed it. I loved the characters of Hope and Maggie and the different perspectives other characters had of them from Buster Babbin, the deputy sheriff, who still saw them through schoolboy eyes to his girlfriend Brianna who met them for the first time at the local coffee shop to Glory, someone who should have been an absolutely unsympathetic character but couldn’t remain one. Despite clues strewn throughout the book, I didn’t know who the murderer would be – and I loved that the murder didn’t even happen until almost 70 pages into the novel, letting you get to know the victim and the other characters before the mystery moved to the forefront of the novel.

Written by Michelle of Honest & Truly! who has often dreamed of opening a small town bed and breakfast but is pretty sure this novel is the reminder she needed of why she doesn’t need the hassle of customers who are always right. See the recipes she would have cooked up at that B&B and more on her blog Honest & Truly! And follow her on social media where she is @HonestAndTruly on Twitter and Instagram.

« Lawyer for the Dog
Wilde Lake »