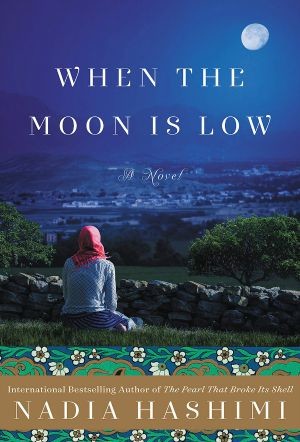 I have always enjoyed fiction written by immigrants or featuring the immigrant experience. I, of course, have read Khaled Hosseini’s evocative fiction about life in Afghanistan (Check out my reviews of  And The Mountains Echoed and The Kite Runner), but for some reason the reality of the abrupt change under Taliban rule in the 90’s — a decade in which I was a functioning adult — never quite sunk in. Perhaps it sunk in more this time, because I read this story of a mother trying to protect her family from the Taliban as a mother myself, fully aware of the dangers her own tween and teen children face in the world.

When the Moon is Low is now out in paperback. You can also read Elizabeth’s 5 Star review of it from it’s original hardcover release.

I enjoyed this book. The book is told from two points of view: Fereiba’s and her son Saleem. The story begins when Fereiba is a teenager. Her mother died when she was born, which distanced her father from her. Her stepmother treats her differently than the children she birthed herself. When it comes time to marry off her daughters, Fereiba gets the short shift. She eventually finds love and the happiness of teaching school and raising a family — at least until the Taliban stops education for girls and forces women like Fereiba to trade in their modern clothes for full cover.

When Fereiba’s husband is murdered, she knows that she had to get her family out of the country. Her sister has managed to settle in England, so that’s the goal. With her teen son, tween daughter and baby son in tow, she manages the hard work of escape.

As I said earlier, the stories of these characters hit home to me and the horror of what refugees truly have to endure was made real. Saleem had to grow up much to fast. Fereiba had to make difficult choices for herself and her family.

From Afghanistan to Iran to Turkey to Greece and beyond, the story of this family will stick with you long after you finish the last page.