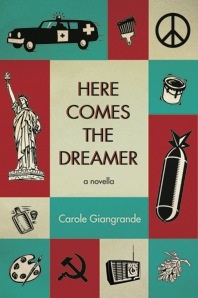 is the sort of book that lingers with you after you’ve finished it. The writing, as sparse and clear as the boreal forests of Northern Ontario that the author’s so fond of mentioning, goes deep into the hidden depths of the human psyche, and in showcasing one small group of people–a family and their suburban neighbors–shines a light on an era.

The story opens in the voice of Alastair Luce, a Canadian transplanted to suburban Linden, near Long Island. It’s the 1950s and America is in the grip of nuclear fear, and Alastair’s Socialist background and work as a painter makes him suspicious to his neighbours. His wife Nora misses the excitement of the war and is discontented with her marriage and child, a girl who takes her brooding, passionate nature from both her parents.

Their neighbours are the Millers. Nora and Lyle were lovers before the war, where Lyle lost a leg to a sniper and his heart to his English nurse, whom he married and brought back to America. Their son Todd is a close friend to Grace. Alastair watches Nora’s eyes drawn back to her former lover. The day she announces her pregnancy with his child is the day he offers a ride to a teenage girl, swerves to avoid another car, and jumps the curb to hit Todd, standing waiting for a bus.

Claire, whom I’m sure is named for the clarity and gravity she brings to things, gives us insight into another suburban family. Her older sister, desperate to get away from the family’s immigrant past and resentful of everything that reminds her of it, shames Alastair desperately. Their parents don’t know how to handle their girls, but they are consistently kind. Claire wants to be friends with Alastair despite their age, and for years she blames herself for the accident, as if her mere presence were such a distraction that the other driver could be blameless. She’s too young to understand Alastair’s deep depression, his alcoholism, and his paintings. And yet those are the forces that drive his story, which continues to coincide with her own.

Grace grows up wild, defiant, and lost. Unloved and abused by her mother, she’s inherited her father’s love of colour and talent for expressing herself through paint. After the accident where she loses her best friend, her parents divorce and she’s tragically sent to live with her mother, who doesn’t even try to understand her. By the third section of the novel, Grace is living in Toronto, which she is literally bathing in vivid, elemental colours through her project with homeless youth, turning the underpasses and alleyways into a canvas to showcase primeval brilliance. And yet she remains a lost child, angry and on the fringes of society, separate from those who love her.

All this sums up the plot, but what makes the novel so good is the writing. Author Carole Giangrande shows us how the politics of our times affect us, how our choices shape us, how circumstances beyond our control can nonetheless control us. She’s a gorgeous writer, too. I highly recommend this book.