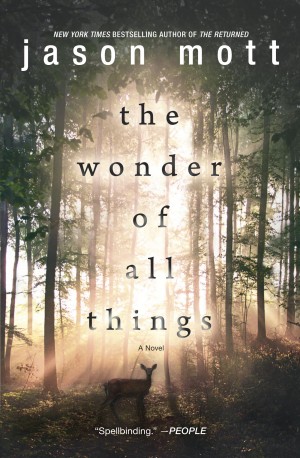 A tragic turn at an air show in a small Southern town reveals a secret about a young girl. An extraordinary secret, an unbelievable secret, it will rock the town and the families at the heart of the event that can only be called a miracle. Jason Mott’s second novel, The Wonder of All Things, tells an emotional story that sparks questions about asking others for help and offering personal sacrifice.

In the aftermath of the small aircraft crash at the Fall Festival in the small town of Stone Temple, North Carolina, as people are rushing to to assist the injured, two children are discovered under the rubble, somehow lodged in an uncrushed space, but the boy, Wash is seriously hurt. His best friend, Ava, is with him, uninjured but terrified from what has happened and instantly worried about the severity of her friend’s injuries. Frightened, she shifts his body, releasing the steel rod that was puncturing him, causing him to bleed even more. Her father, Stone Temple’s sheriff, can see them but not reach them, and he instructs her to put her hands over his wound to try to stop the bleeding. When she places her hands on him, she closes her eyes and hopes and prays, thinking that she’d give anything for her dear friend to survive.

The moment changes for her, bringing her visions and sounds that include the voice of her mother who had died five years earlier. Awakening from her vision, she feels lightheaded and weak, only to discover a shocked, but now uninjured Wash lying under her hands. No mark remains from where the steel rod had punctured his torso. He has been healed.

Just as happens so often in the real world, in this fictional world a bystander has captured the amazing footage on cell phone video, and as soon as it is uploaded and released via social media, Ava’s story goes viral. The small town soon bursts at the seams with outsiders, people making what could be labeled a pilgrimage to see the girl with the power to heal, wanting her to share her gift with them or their ailing loved ones. Religious groups and leaders rush to the town as well, hoping to enfold the miracle child and her family into their flock.

But the heart of the story lies with Ava, a thirteen year old girl who cannot begin to explain what happened, who is as confused as everyone else, but who is the only one who can truly understand the effect of her ‘gift.’ She is never quite the same after the healing, mentally or physically, and she must decide a path to take when everyone around her wants her to perform. She struggles with questions of responsibility and sacrifice, a lone person with an ability facing an entire world of need.

Similar in tone as his debut novel The Returned, which I also highly recommend, this novel has an ever-present hum of uncertainty, or magic, or unknown power that renders what we know in this world to be questionable. Reading it feels like being in a trance– the type of book that you start and cannot find a suitable page on which to stop. The storytelling seems to be purposefully open to interpretation at times, with a glow to some scenes that blurs the specifics and makes the reader think about the meaning of what’s happening rather than the little details of actual events. Be prepared to be swept away.

We’re happy to be participating in the TLC Book Tour for The Wonder of All Things.