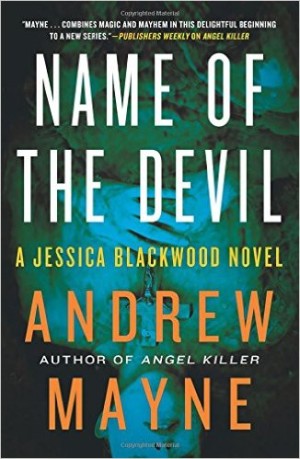 When a church explodes in Hawkton, Jessica Blackwood is part of the team called in to investigate and determine what happened. She’s not the agent in charge, and Vonda Mitchum is not a fan of Blackwood thanks to the publicity she got as part of a serial killer in the previous book in the series. She does her best to minimize Blackwood’s role throughout the investigations in Name of the Devil by Andrew Mayne, but that doesn’t stop Blackwood from seeking out the truth.

This is the second book in the series, but not having read the first one doesn’t stop you from being pulled into the thriller as Blackwood races to identify the link between the Alsops, Jessup, McKnight, and Reverend Curtis who all apparently died in the church explosion in West Virginia for a reason.

There is a supernatural element to the book, as Jessica Blackwood comes from a long line of performing magicians, but all is explained with smoke and mirrors rather than ghosts or true magic. Her background stands her in good stead in attempting to solve the mystery and stop further deaths as best she can.

Blackwood is somewhat of a rogue agent within the FBI, which makes her job harder, as well as making her a more compelling character as she goes outside the expected lines to find the information she needs.

She also has a secret stalker who somehow knows everything that’s going to happen and not only helps point her in the right direction but also is there to save her neck when she gets in too deep. He’s an FBI person of interest, but no one can track him down, and he remains another mystery within the book.

Name of the Devil is fast paced, with plenty of action throughout the book to keep the pages turning. Of course there are unlikely scenarios, but that’s half the fun, and it is all explained in a way that doesn’t require the reader to completely suspend belief. I love that Blackwood isn’t always completely successful everywhere she turns, as it keeps both her and the plot interesting without becoming trite.

She has spunk and personality, and the snippets shared at the beginnings of many chapters from her childhood help explain how she got to be the person she is – and her relationship with her family. It draws you in further, and wanting to understand it all encourages me to go back to read Angel Killer, the first book in this series in addition to waiting for the next book to be written and released.

Written by Michelle of Honest & Truly! who couldn’t do a card trick if you paid her. She can, however, work some magic in the kitchen. See what she’s cooking up on her blog Honest & Truly! and follow along with her on Twitter where she is also @HonestAndTruly.