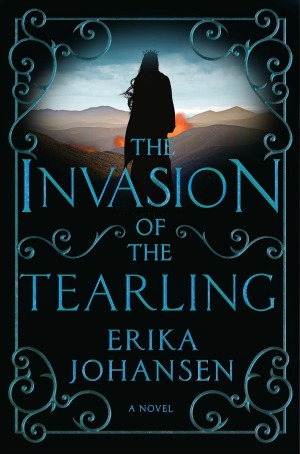 Last year, when asked for my best books of the year, I included The Queen of the Tearling (linked to my review) without hesitation. A gripping read that managed to breathe new life into a moribund fantasy genre, it featured the vulnerable and yet bold Kelsea Raleigh, who becomes the Glynn Queen. The first book leaves you hanging a bit, so I was thrilled to get my copy of the sequel. And it doesn’t disappoint–at least not much. More on that later.

In the first book, Kelsea inherited a problem from her mother, the former Queen. The bordering land of Mortmense, bigger and ruled by the brutal and much feared Red Queen, demanded tribute from the Tearling in the form of a quarterly shipment of slaves. When Kelsea puts a stop to it, she knows she will have to deal with the consequences. This book opens with the Mortmense army massed on the  border, vastly outnumbering the Tearling in manpower, weaponry, experience, and every way imaginable. A clever general buys them a little time, but Kelsea knows that there is no way she and her people can win this war.

Additionally, the two sapphires she wears seem to be dead. They no longer give her special power. And yet, Kelsea finds herself slipping into fugue states in which she travels back to the time in America (to our near future) before the Crossing, which took place three centuries earlier. It’s a time where the differences between the have’s and the have-not’s have reached epic proportions, where the 1% are expected to reproduce as much as possible and where it’s dangerous to simply be a woman who possesses her own mind. Kelsea’s whole existence needs to focus on finding a plan to save her people, yet she’s caught up in Lily’s story, this random woman from the distant past who seems lost to history, whose story seems to have no bearing on the terrible issues facing Queen Kelsea now.

Lily’s story adds a strange modern twist to this fantasy novel, grounding it more in our own world than the story was before. At first I was resistant (to be honest, I’m done with dystopian tales), but Lily’s story pulled me in quickly, and I found myself wanting to learn more. Additionally, there are the characters we came to know in the first, as well as others that I quickly came to care about. Father Tyler, for example, a sweet elderly priest who actually believes in God, as opposed to the rest of the “church” who use religion only as a means to control and manipulate. Mace, the head of the Queen’s guard, continues to be a complex and believable character. Ewan, the mentally slow jailor whose loyalty is unquestionable, and Aisa, the abused child now in safety whose talents lie in the quick use of the knife, are great additions to the cast of characters.

The Invasion of the Tearling

is a worthy sequel–another fast-paced gripping read with likeable characters that will occasionally make you want to cheer. But it’s definitely darker than its predecessor. Kelsea makes some worrying decisions. There is much that is disturbing, from Kelsea’s newfound abilities to harm, to Lily’s abusive husband, to the pope-equivalent’s savagery. These scenes, along with the descriptions of suffering (no one in this book lives a happy, simple life), move this book firmly into the realm of adult fantasy fiction, and I wouldn’t recommend it for anyone under 18. Johansen is a fantastic writer, although at times I felt she had a bit of an agenda, and for me that detracted from the book.

Things end with plenty of questions unanswered, but enough information given that I’m fairly sure where the next book will go, at least in the beginning. And in spite of its faults, I can’t wait for the finale. This is a great read, one I’ll be recommending to people. In fact, I had to go into my daughter’s room to get it back in order to finish it. When you get it, I recommend blocking out large chunks of time, as the combination of stellar writing, gripping plot, and believable characters is hard to put down.

« What’s On Your Nightstand, June 23
Shakespeare Basics for Grown-Ups: Everything You Need to Know About the Bard »