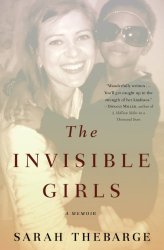 Sarah Thebarge was used to feeling invisible. Raised in an extreme fundamentalist Christian home, she fought for the chance to go to college. From there, she went on to Yale, where she earned a Master’s degree in medical science. She was working on a second Master’s in journalism from Columbia when she was diagnosed with an aggressive form of breast cancer that resulted in a double mastectomy at the age of 27.

18 months later, after the cancer had recurred twice and she had nearly died from pneumonia, she decided she needed a fresh start. She moved as far away from Connecticut as she could, to Portland, Oregon, where she stood, bald and shivering, at the curbside of the airport and found herself once again all but invisible to the healthy reunions going on around her. And she was, unsurprisingly, furious at God. “I wouldn’t do this to someone I hate, and you’re supposed to love me,” she tells him in prayer.

A year later, she was on a MAX train (our public transportation) when a small Somali girl caught her eye. Before she knew it, a toddler had climbed into her lap and fallen asleep, and a slightly older girl was playing peek-a-boo with her. Sarah felt drawn to the family and got their address. When she went to visit them to return a toy one of the girls had accidentally left behind, she found a family in crisis, lost in a new world and unable to navigate it.

Hadhi had married young and borne 8 children, 3 of whom died. She came to America with her abusive husband, and somehow found the courage and means to report the domestic violence, in spite of speaking no English. The authorities deemed the man a threat to his family, so they removed him from the household and relocated Hadhi and her 5 daughters to a new apartment. The 3 oldest managed to go to school, but Hadhi was helpless in her new apartment. Having grown up in a small village without electricity in a war-torn country, she didn’t know how to operate a stove or that the door to the refrigerator needed to be kept closed. She didn’t know how to turn on the heat or how to pay her bills. She and her girls were close to starvation, eating meals of moldy bread dipped in ketchup.

As Sarah begins to be involved in the Somali family’s life, she finds her own life changing in unexpected ways. This family, invisible to those around them, grab her heart. And as she gets involved in their lives, she finds her own falling into perspective. I live in Portland and I work with refugees, so there was a lot of her story I could relate to personally, including the challenges she faced as she tried to determine how best to help a family with overwhelming needs.

is the story of various kinds of invisibility, and the ways in which we have the power to make each other visible. It’s a very moving story, at times almost shattering, but Sarah’s fierce honesty keeps it free from any easy sentimentality. As she heals, she begins to recognize truths beyond platitudes, about God’s grace and presence and love during the hard times of her life. As she pours her life into Hadhi and her daughters, she finds herself experiencing new joy and peace. The Invisible Girls

isn’t an easy book, but it is in many ways a very profound one. Highly, highly recommended.

Sarah is putting all the proceeds of sales of this book into a college fund for the 5 Somali girls, so that they can grow up, get a good education, and find ways to make themselves visible.