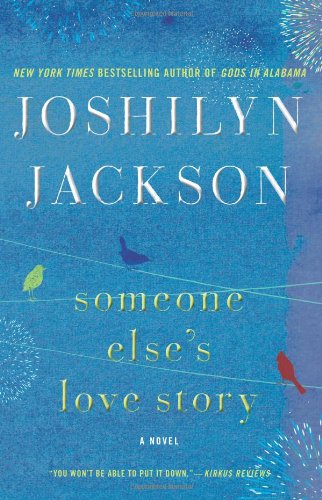 Shandi Pierce is fierce and spunky and independent and really really funny too. She’s a single mother, moving with her 3 year old son from her mother’s house in a small town to Atlanta, where she’s going to live in her father’s condo so that her son can attend a better preschool while she finishes her college degree. They stop at a Circle K and suddenly Shandi finds herself staring down the barrel of a shotgun. Her son is several feet away from her. When a blond, muscular man steps between the gun and her son, Shandi finds herself falling in love.

This isn’t exactly her love story, though. See the title.

William, the man who steps between her son and a gun barrel, and Shandi are two unlikely characters. He’s autistic (and the fact that it took me half the book to put a label on that is testament to author Joshilyn Jackson’s sheer writing ability) and a geneticist, dealing with the one-year anniversary of a fatal accident involving his wife and 2 year old daughter which he understands as an act of physics. She’s a single mother who was technically a virgin when her son was born, and her way of dealing with his conception involves a lot of denial and mental gymnastics. The two couldn’t be less alike, and yet they provide something for each other that allows them to move forward. Each of them has a close friend that provides them emotional grounding; Paula for William and Walcott for Shandi. The story is told in alternating voices, Shandi in first person and William in 3rd, and the different styles tell a tale in themselves. Shandi is fiercely funny and not easily vulnerable; William is matter-of-fact and distant and even the 3rd person feels right for someone like this.

is delightful. It’s really funny and has a light-hearted feel to it even as it tackles hard issues head-on; date rape and infidelity and religious divisions and the difference between showy seeming-miracles that aren’t real and small, heart changes that are. It’s poignant and heart-breaking at times, but manages to still be really funny–mostly through descriptions. This is a book that ends on a note of hope, of redemption, but neither of these things is cheapened by being given too easily–they cost people something.

I can’t recommend this novel highly enough. I came to really love and care about the characters. There are a couple of plot twists that I just didn’t see coming, but that were deeply satisfying. I didn’t want it to end. It’s just a really good story, well-written with people you love and feel protective of. This is definitely a book to keep and re-read.

Nancy and I both read Someone Else’s Love Story

, which I think is kind of fun. Go see what she thought of it, and enter to win your very own copy, over at 5 Minutes for Mom.