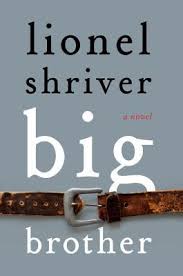 Is a person’s overweight stature the business of anyone else? Is the act of eating something one does for sustenance, for experience, for emotional fulfillment, for distraction, or all of the above? Is physical fitness equated with morality? Should it be? When you crack open Lionel Shriver’s new novel Big Brother, be prepared to have a mass of questions like these swirling around in your head as you take in the captivating narrative.

Shriver does a magnificent job here in creating a cast of characters that feels real, even with their own individual, and sometimes extreme, habits and characteristics. At the center of the story is Pandora, a former caterer who now runs a company that makes a unique novelty product, and though her work isn’t terribly fulfilling, it does provide very well for her family. Her husband Fletcher pursues his interest in creating high quality furniture, but since they don’t actually sell, his work is more like a hobby, and his previous hobby of bicycling has transformed into an all-out health obsession. Pandora still loves to cook, even if she’s only feeding herself and her two adolescent stepchildren while her husband prepares his own extremely health-conscious meals.

When Pandora’s down-on-his-luck brother Edison comes for a visit, his appearance shocks her, for he is unrecognizable after gaining hundreds of pounds in the four years that have passed since they last saw each other. His physical form is enough to repel Fletcher immediately, so it doesn’t help that their personalities don’t mix well, either. Edison’s visit was intended to be for a set period of time, but when that time comes, Pandora questions whether sending him away isn’t just the same as signing his death warrant. It’s obvious that he is unable to make a change in his eating habits and his overall health on his own, so Pandora suggests an arrangement that just might save his life… but at what cost to her own life and her marriage?

I was definitely intrigued with the plot of this novel– sister goes on a mission to help save the life of her morbidly obese brother– but it sounded like it had the potential to be either really, really good, or quite preachy and overwrought. Thankfully, it was much more nuanced and thought-provoking than I had expected. Shriver is a master at character development, and everyone comes to life on these pages. Thankfully, the narrative stays far from preachy, instead offering thoughtful discussions and opinions about people’s relationships with food and eating, and the troubles of obesity in our society from multiple perspectives.

I’ve been wowed by Lionel Shriver before. Her 2010 novel So Much For That (linked to my review) was a National Book Award Finalist and also earned the great distinction of being called a Five Star Read on our site! I’m happy to place Big Brother in that category as well.

Earlier this month, Shriver appeared on National Public Radio’s The Diane Rehm Show to discuss the book. Click the link to listen to the interview and read an excerpt of the book.

Thanks to TLC Book Tours for the review copy of this book, and if you’re intrigued, check out what other bloggers on the tour are saying about the book.