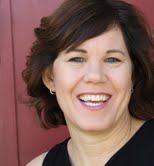 People often ask writers and other creative people where they get their ideas. There’s a sense that there’s something mystical about getting an idea, or magical, or at least not exactly straightforward. If you haven’t read it, Neil Gaiman has a killer post about answering this question. He started telling the truth. “I make them up,” he said, “Out of my head.” People didn’t like this answer. They wanted something jazzier.

This question – where do writers get their ideas? — is at the center of my novel, Perfect Red. It’s the 1950s, the golden age of consumerism in America, and my main character, Lucy, imagines that there is a Department of Ideas, where book ideas are displayed under shimmering lights, in gilded niches on the walls. She believes them to be something exclusive, somehow outside of her reach. It takes her much of the book to figure out that nothing could be further from the truth.

The singer-songwriter Willie Nelson once said, “The air is full of tunes; I just reach up and pick one.” I love this quote. It captures so much about the ever-present nature of ideas, and something about how one bright shiny idea gets singled out amidst the clamor of many others. It also captures the conscious role of the creator — and that’s something I know to be true about picking an idea. You have to pick. You have to bring a discerning mind to the process. Perhaps Nelson recognizes the ripeness and beauty and readiness of an idea. For me, it’s as if I can literally hear the idea asking to be chosen. Or, more precisely, it’s as if I can’t ignore the noise of it – it’s louder, more insistent than the others. It won’t go away.

Once you pick, the noise will get louder. Here’s how it works: I have the thought that maybe I should set my story in an avocado orchard. It’s a thought like any other — it comes, it goes, and there are a thousand others after it. But I start to pay attention to the avocado orchard. I start to think about making my character a gentleman farmer. And the next day in the newspaper there’s an article on boutique avocado farms. A few days later there’s a piece on NPR about the rise in the consumption of avocados. A week or so later, I pick up a magazine at the doctor’s office and there’s an article about how some celebrity just bought an avocado farm. Who could ignore this kind of noise? Not me! My last novel, The Threadbare Heart, was set, in part, on an avocado farm – and it’s worth noting that I had this avocado farm in my head long before I had the characters or even the story. It was avocados first, and then everything else followed.

People new to writing, or to the creative life, may recognize the insistent idea, the shiny idea, the idea that’s ripe for choosing, but they may not be comfortable committing to it. How do you know it’s the right idea? What happens if it’s the wrong idea? And what about the other ideas they are ignoring in favor of this one? The truth is that you will get no assurance. There will be no guarantee. Painter David Hockney has the perfect answer for these questions. “Sometimes,” he said, “I just begin.”

It’s that easy, and that difficult. You pick. You begin.

Editor’s Note: Check out my (Jennifer’s) review of Perfect Red, and leave a comment over there to enter to win your own copy. You can also leave a comment here about this post to get an extra entry.

Guest Contributor Jennie Nash is the author of four novels and three memoirs. She teaches in the UCLA Extension Writers’ Program and is a private writing coach – which is to say that she is in the business of helping writers pick –  and hone – their ideas. Visit her at www.jennienash.com.