Hello, Sleeping Bear Press fans! You didn’t think they would forget about St. Patrick’s Day in their offerings did you? Well, they haven’t and I’m delighted to tell you about two picture books that hit the spot when it comes to Ireland, luck and leprechauns! The first is S Is for Shamrock: An Ireland Alphabet

which is also a part of Sleeping Bear Press’ Discover the World series. From A is for Ancient Ireland all the way through to the discovery that the letter ‘Z’ is not a part of Irish alphabet, you’ll love discovering more about the Emerald Isle. I learned new things, like what the Claddagh ring represented. I was delighted by the explanation of fairy rings and I received refresher courses on various tidbits and fact about this country. Loved this book but I doubt you expected me to say otherwise! 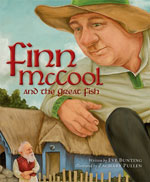 Next up, I was tickled, well, green to read through Finn McCool and the Great Fish

. Finn McCool was a mythological giant who was big, strong and kind. It was also assumed that he was not really bright. This story tells of McCool’s quest for wisdom which is also a quest for respect among the town’s folk. Written by Eve Bunting, this is a story worth reading during the month of March in celebration of St. Patrick’s Day.

Speaking of luck (which I wasn’t, but now I am!), it is my pleasure to inform you that Sleeping Bear Press is offering a copy of each of these titles to one of you. The contest is open to U.S. residents only and the winner will be announced March 3.

So, who will have picked the four leaf clover to win these two titles? Well, leave a comment and we’ll see!

The winners of last week’s giveaways are

Wench: #38 Deborah Wellenstein
This Little Prayer of Mine: #11 Alexandra

« What’s on Your Nightstand — February
The Postmistress »